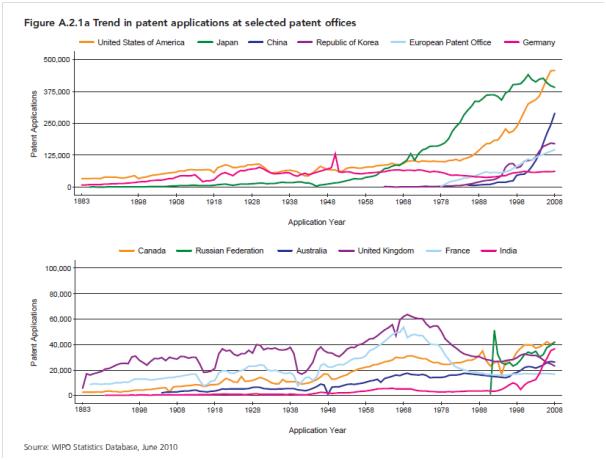 As you can see from this graph, the numbers of applications are staggering, and the growth in recent years has been huge. The meteoric rise in filings from China, and to an extent India, reflects their rapid industrialisation, and movement from nations that only absorb technology to those that develop and export their own IP. There are stimated to be 6.7 million patents in force around the world, and around 1.9 million new applications were filed internationally in 2009.

An interesting fact is that  as a consequence of the use of the European patent system, the Australian patent office now handles more new patent applications than France and the UK.

In an increasingly multilateral and interconnected world, patent officials are spending more and more time examining exactly the same patent applications as have been filed in each of the other 4 ‘big 5’ offices. There has been a great deal of work done between the offices to enable greater recognition of work by the other offices, so as to reduce the extent of duplication (quintlication!) and unnecessary re-work.

Even modest gains on each case can create significant increases in overall efficiency and reduce the time application have to wait to be examined.

One measure has been the adoption of the Patent Prosecution Highway (PPH) process. This started as a set of bilateral agreements between the USPTO and a few other national patent offices, which has grown to bilateral arrangements between the USPTO and 20 other national offices. The precise nature of the agreements vary, but they are all concerned with allowing improved speed of processing from applicants.

More recently, this had spread to co-operation between other offices. The Japanese and Chinese patent offices have just announced that they have established their own PPH process. This will involve, in addition to examination co-operation, the exchange of English language abstracts of their respective patent collections, to assist them both in better searches and examination.

Advantages for Australian applicants
For Australian applicants, the PPH arrangements provide a real opportunity. Australia has a very liberal process
for allowing expedited examination. For a small additional cost, it is possible to have examination occur quickly, generally within two months. Assuming a favourable examination outcome, and prompt action, the application can be
accepted within about 4 months from filing. The favourable outcome can then be used to invoke the PPH arrangements with the US. Again, assuming that the examination outcome is generally favourable (for at least some claims) then a
US issued patent can be obtained within 6 or 7 months.

In the normal course, this would be closer to 3 years or longer. As is always the case in the US, it is possible to allow some claims to proceed to issue, and file a continuation to pursue broader claims, if appropriate.

Early grant in the US is not always an advantage, but depending upon the business strategy, it can be extremely
valuable. For example, transforming a pending Australian application into granted patents in the US and Europe can be very significant for potential investors, as it takes a probability into a reality.

A mechanism for rapid examination in the US for Foreign applicants

Recently, the PPH agreement between the US and Australia has been amended, so as to include any cases examined by the respective offices, including cases that claim priority from another country. This means that applicants from other countries (including the US) can use the Australian expedited examination process, obtain acceptance, and then file in the US and use the PPH process. We offer very cost effective inclusive pricing for expedited examination, please let us know if this is of interest and we will be happy to provide more detail.

We expect to see more and more of such bilateral and multilateral examination agreements , and so we will continue to monitor the development of PPH and similar mechanisms, to identify the advantages and opportunities for our clients in their use.